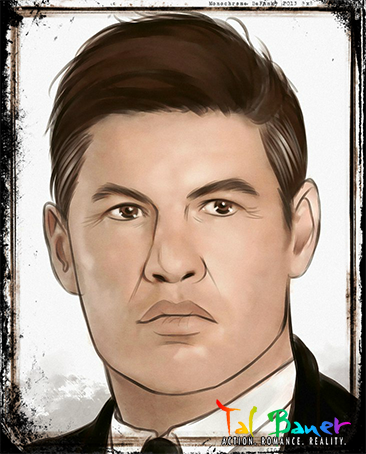 This week, Ethan’s life is in serious peril. He is struggling to survive, and Jack is doing his best to keep Ethan going.  Will they survive this latest threat?

“Go on without me.” Ethan’s voice was strained. His words shook, and his face contorted with pain, with anguish. “Leave me. I’m too far gone.”

Ethan, face half buried in his pillow, pulled the tissue to his nose and groaned, the rattle of a man assured of his own pending demise. “I’m dying.”

Ethan’s sniffing sounded like a broken trombone was blaring, a tragedy of brass and snot. Jack pressed his lips together, holding back his smile.

“I leave everything I own to you.” Ethan sighed, long and loud, a dramatic burst that wouldn’t have been out of place from a southern belle at the turn of the last century.

“We’re married, love. I get your stuff automatically.”

Another pitiful sniff. Ethan moaned, a mournful half-sigh, half-whimper as he pushed his face further into the pillow he clutched.

“How about I make you some soup?”

“Why bother? I’m going to be dead soon. You’re just trying to feed a corpse.”

Jack patted Ethan’s head, smoothing back his dark strands from his clammy forehead. “I’ll be right back.” He leaned over, kissing Ethan’s hair.

Ethan grumbled and tried to move, tried to get away. “Don’t kiss me,” he mumbled. “You’ll get this plague, too. And then you’ll die.”

He listened to Ethan’s grumbles as he headed for their kitchen. Their kitchen in their home. Finally, they had a place of their own. Not the White House, or a hotel room, or an apartment in Iowa, or a jeep in Siberia, or a nuclear submarine under the Arctic. This was theirs. They had four walls, a roof, and—best of all—privacy.

Boxes still lined the walls, a mixture of Jack’s crap from storage—and before that, his apartment in DC when he was a senator—and Ethan’s townhome, and also their stuff from when they lived together in the White House. Their kitchen was mostly made from Ethan’s stuff. Jack had never been great in the kitchen, before Ethan, and didn’t have much in the way of useful kitchen paraphernalia.

Two cups sat next to their coffee maker. His, a chipped mug from his alma mater, the University of Texas, and Ethan’s rainbow cup, an art deco print of his own picture, a campaign poster from his presidential election redone in vivid pride colors. Jack smiled. Ethan had used that cup, the one he gave him for Christmas last year, exclusively since Christmas Day. He brought it with him from Iowa each weekend, and it was the first thing he unpacked from the crates Iowa had shipped to DC when he moved into the Residence.

Jack rummaged in their cabinets until he found a can of condensed chicken and rice soup and a sleeve of crackers. The soup warmed as he put a chunk of crackers on a plate. There was a half-empty bottle of Sprite in the fridge, and he filled Ethan’s rainbow mug with Sprite as the soup started to bubble.

Jack padded back to their bedroom—their bedroom! He still was giddy at the thought—and sat on the edge of bed. Ethan had thrown himself across their bed, pulling Jack’s pillow to him and mashing his face into the center as if he could huff Jack’s scent. He was doing his best impression of a jellyfish, stretched out as much as he could, and his legs stuck out from the ends of the sheet, his ankles hanging off the side of the bed. He was shirtless, and the ends of their sheet wrapped around his hips, leaving the tan skin of his back exposed. The muscles along his back were rolling hills, dipping into the valley of his spine and the curve of his lower back hidden beneath the sheet. His shoulders flared, muscles wrapped around his shoulder blades and up the back of his neck, and corded down his arms.

He was beautiful, stunningly, stunningly beautiful. Jack let his fingers drift down Ethan’s neck, ghost over his skin and down his back, along the bumps of his spine and ripples of his muscles. Ethan twitched beneath his touch, and tiny hairs rose to meet Jack’s fingers, goosebumps on Ethan’s skin erupting along his lower back and down his arms.

Groaning, Ethan opened one eye and peeked over his shoulder. “You shouldn’t touch me. I’m diseased.”

“I brought you food, love. To combat this deadly plague so you can live to fight another day.”

Moaning, Ethan hauled himself up, moving like a lumbering bear just coming out of hibernation. His face, normally stern, severe even, focused and intent on the mission before him, had turned into a pout, his lower lip pushed out, eyebrows pulled together. He was, for the moment, the world’s largest five-year-old, grumpy and overtired, and all Jack wanted to do was smooth his rumpled hair away from his forehead and kiss his cheek.

Ethan sat back against their headboard with a huge, rattling sigh. He still held Jack’s pillow, squeezing it to his chest like it was his personal teddy bear, a security blanket that he couldn’t let go of. Ethan propped his chin on top of the pillow and scowled.

Grinning, Jack held out the plate of crackers with the bowl of soup. Sighing again, as if Jack were forcing him to endure brutal hard labor, Ethan took the food. He huddled over the plate and bowl, slurping soup off his spoon with loud smacks and swallows. He got about half of the bowl down, and a cracker and a half, before he passed the plate back to Jack.

Jack traded the plate for Ethan’s rainbow mug of Sprite.

Finally, Ethan—kind of—smiled. He clutched the mug and sipped the Sprite, sagging back against their pillows and the headboard.

“You should get some rest.” Jack set the plate on the hardwood floor, out of the way, and crawled into bed beside Ethan.

Ethan sent him a horrified look and shrank away as if he didn’t want Jack’s touch. “Jack… Go away. You’ll get infected.”

“And then I’ll die along with you, like the very best love stories.” Jack hauled Ethan closer and kissed the top of his head. “Rest, love.”

Grumbling again, Ethan slid down until he collapsed into Jack’s lap, the side of his face mashed against Jack’s legs. He still clutched Jack’s pillow, but he curled up, almost in the fetal position as he breathed through his mouth, heavy, slow breaths that tickled Jack’s belly through his shirt. “You should start measuring my coffin.”

“Yes, dear.” Jack grabbed a book from his bedside table and slowly stroked one hand down Ethan’s back, over and over.

The next morning, Ethan padded out of their bedroom in his boxers, rubbing one eye with his fist.

Jack beamed, sitting on the couch with his coffee and the paper. “It’s alive!”

Jack wrapped his arms around Ethan’s waist and kissed his belly, right above his belly button. He looked up and played with the waistband of Ethan’s boxers behind his back. “But, you’re certain you’ll live through this? You’ll survive the plague?”

“Maybe.” One corner of Ethan’s mouth curled up, just a bit. “And only because of my nurse.”

“You should probably give your nurse a big thank you.” Jack winked.

“In a few days.” Ethan still looked a little pale. But, he shuffled to the couch and collapsed beside Jack, rolling around until he had his head in Jack’s lap again. “Thanks,” he whispered, kissing Jack’s shirt-covered belly. His eyes were already closed.

“How did you survive the flu before me?”

Ethan’s smile dimpled his cheeks. “It was a cold, lonely existence before you, Jack. I suffered alone. I barely survived.”

Jack slipped his fingers through Ethan’s hair, massaging his scalp. Ethan hummed, sighing like a content cat, and pushed his head into Jack’s touch. “Well, I’m glad you endured. And I’ll be your nurse anytime you need.”

Ethan’s eyebrows quirked up, two quick bounces as he grinned wide. His eyes stayed closed, though. “In a few days, I might need my sexy nurse to take a look at a problem I have. Something seems swollen.”

“Oh, yes. Very big.” Ethan rolled into Jack, pressing his face into Jack’s belly. He moaned, but he was still smiling.

Jack laughed, and he kept stroking his hand through Ethan’s hair. “I love you so much.”

Ethan finally peeked up at Jack. His eyes were warm, full of adoration, full of the kind of love that had set Jack’s world on fire and changed his life for the best. God, he loved this man, every part and piece of him. Even his flu-stricken zombie side.

“Love you too, Jack. Thank you for staying with me.”

Jack blew a kiss at his husband. “All the way, love. All the way.”

Timestamp: Post-Enemy Within. Jack & Ethan, after moving into their (first) new house together.